MagicSpam Better ZERO Day Protection. Our anti-spam software stops Trojans & Bots with "Mail Server Profiling" Visit the Features to find out why MagicSpam is the best solution for your needs. Read More

Discover why MagicSpam is so popular for spam protection..

"I added the MagicSpam module 24 hours ago on our plesk server and the results are phenomenal. I'll be a lifetime subscriber."Raymond

"My OS (SUSE 10.2) wasn't supported. I asked. 2 days later I got working version for my OS. Great job. Performance of MagicSpam is impressive. I have it installed along with Spamassassin and they both work well. Thank you."Tom

"MagicSpam is by far the easiest and most powerful spam filter on the market. Installation is a piece of cake. If every ISP and web hosting company were to install MagicSpam, it just might put spammers out of business!"Nancy

"MagicSpam is such a relief, it simply blocks out most of the rubbsish that get thrown at the server, and I mean most!!! 1765 email today, only 20 let through none of which were spam!! Excellent support and well priced! Keep it up."Matt 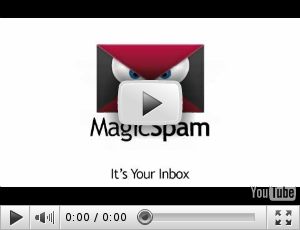 There are two types of reseller programs available, and it depends how you want to earn your money. MagicSpam is the simplest way to upsell your customers. It only takes a few clicks to get started. The advantages of being a reseller are obvious. A simple way to generate recurring revenue, or if you need to buy licenses in bulk you have the ability to get the best prices possible. The more you sell or buy, the cheaper your costs become. And as MagicSpam becomes more and more widely accepted as the obvious choice for Spam protection, selling and using MagicSpam becomes easier.